Yesterday I’d been invited to speak at St Gemma’s Hospice in Leeds as part of a Community of Practice Event along with Clare Mason and Professor Murna Downs from Bradford University.

By pure coincidence I lived near the hospice for a year when I lived in Street Lane in Leeds. I actually remember going there for some reason but can’t remember why…….

Anyway, a cold morning awaited me and I headed out for the taxi with no coat, only to go in reverse and put my winter coat on before heading off to the station in the taxi……🙄 It was a beautiful morning trundling past the Humber…

Clare met the taxi outside the Hospice and paid the fare for me and then I was shown in and a cuppa tea was waiting for me. Murna and Lyndsey also arrived and had a huggle

The writing above the door of the room was wonderful to see…..

Bradford Uni have worked in collaboration with St Gemma’s  hospice funded by Health Education Yorks & Humber……the staff were those who had attended the Train the Trainer course from 11 Hospices. But due to circumstances 7 were represented today….

The Hospice staff are naturally caring but it’s the added issue of dementia that causes issues. For example, a visitor with dementia simply forgetting the person has cancer, especially if that person is a partner……but so much else obviously
Jane from St Gemmas did the housekeeping bit before we all went round and introduced ourselves.

Murna gave the initial talk around the NHS Pathway for dementia and here specifically for dying well with dementia but also living as well as you can with advanced dementia. We need all staff to have access to the knowledge to put into practice the key learning outcomes…….

with many influences of background, age, biography etc and also with many involved – the person their family, care staff, Clinical experts and pastoral Carers……

Language – living with advanced dementia, end of life care, actively dying or terminal phase – what do we mean when we talk about this in the hospice setting.

“Are we involved in specialist care or simply humanistic care? “ asked Murna

We shouldn’t just invest in the ‘end of life’ care when death is imminent …….

I chipped in as there was lots of talk of living and dying well, because these are the words used on the NHS Pathway.. 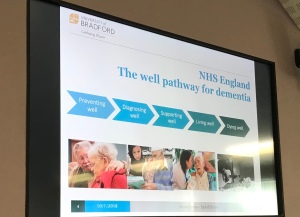 But I have a problem with this as ‘well’ for some people is very different for others. I prefer ‘as well as you can’. For some people, just getting out of bed one day is an achievement and needs to be celebrated. So the so called ‘person centred care’ isn’t ….because it can make those who struggle feel worse because their best is very different from another person. Dying well might not be achievable in all case but if the staff ‘do their best in the circumstances’ that is dying as well as is possible.

So now is was up to the hospices to feedback their learning from having delivered the course to their own staff…St Gemma’s  hospice was first and Gemma came up with how ALL staff benefit from training – the food staff, volunteers, Housekeeping and reception staff not just clinical staff.
Gemma spoke of the challenges, staffing issues and how to free staff etc but all attendees fed back positive comments.

Wheatfields Hospice went through their presentation and have all their staff going through the Foundation training before moving on to the more advanced which meant the groups were of mixed ability which made the groups so varied.

St Catherines Hospice in Scarborough. They started training 3 years ago and have trained 102 staff to date of all skills through the Foundation Course. Again the difficulty of getting staff to attend was highlighted.

St Leonards Hospice were up next and they both knew my daughter Sarah and worked with her when she was at York They spoke of needing to be more aware of staff circumstances as you might not know they are caring for someone with dementia or someone may have died in their family from dementia….
It’s important for those staff who believe they know too much to attend a Foundation course. It’s how you approach those staff and often it’s a case of stating that they need to attend to share their experience.

By having volunteers and non clinical staff on the same Foundation as Clinical staff shows the value placed on ALL staff. Hospices can’t exist without the working together of all teams.

Barnsley Hospice – Again the feedback was that it was nice to have all different skill groups to be together and mix together.

Harrogate Hospice was last but not least and also said how mixed staff groups worked very well. The expectation there is that everyone will attend, it’s not optional. The facilitator decide who attends what session so the mix is good

After lunch me, Clare, Murna and Lyndsey were taken on a tour of the Hospice and they asked me to comment on a room they were hoping to adapt. I gave a few ideas for change.
We headed out into the beautiful garden and couldn’t resist a piccie….

Once everyone was back in the room it was then my turn to speak. I covered as much as I could in the time allowed but the one thing that came out as most useful was when I said:

“I wonder how many of you always sleep on the same side of the bed? Most people do. But when you’re in hospital, or you’re moved into a Care Home or Hospice people are often helped into bed at whichever side is convenient for the nurse – imagine how confusing that can be for someone with dementia. Or think when dressing people which arm they normally put in first when putting on a shirt or coat?”

There were many flashing lightbulbs moments and some lovely comments and observations made after I’d finished. It was almost time for me to go but we snook in time for a group photo 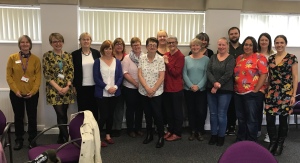 During the discussion before I left on the End of Life Module Terminal Agitation was raised. Me and Clare were saying how at the End of Life it’s so important to see the person and not let the dementia prevent you from doing the best for that person.

“Treating the symptoms the same as someone without dementia…”

Wonderful that there was no sight or sound of ‘suffering’ in either the talking or on slides……. All were willing to learn and understand more and couldn’t have been more receptive. They, as trainers, are all doing their bit to spread the word and could not have had better people to train them than those from Bradford Uni……..

8 thoughts on “A Day at St Gemmas Hospice Leeds…..”