Yesterday I had a trundle to a town I’d never visited before – Chorley……I even had to look. It up on the map🙄…I knew vaguely which direction it was but didn’t have a clue how to get there, but turned out it was fairly straight forward with only 2 changes……

Teri Stephenson, CEO of Age UK Lancashire,  had asked me to talk at their Lancashire event eons ago, and since I’d never spoken to that charity I was more than happy…the other wonderful thing was that Teri was a Twitter pal apparently! Within minutes of me agreeing she’d assured me that someone would meet me at the station, I’d have a mobile number and they’d take me back to the station…….simple things that immediately eleviate stress of travelling………

They’d given me 45 mins to an hour, so well worth the trip….sadly it did mean I’d be missing my Christmas Young Onset Dementia meeting in London as that was fixed to the same date a week or so later 🙈….but I can’t be everywhere sadly…..

At this point I would like to promote the Christmas fundraising video for YDUK as they are struggling as a charity at the mo, like many charities, I know, but this one is so dear to me as it’s the only one dedicated to supporting people with Young Onset. So if you could take a moment to watch this I’d appreciate it and remember, even £1 counts……

Anyway back to yesterday…….my taxi driver arrived early and chirpily….we chatted about yesterdays appalling weather and within no time were at the station. I’d taken my Christmas choccies and a card for my superheroes ……..as they had to rescue me last night as well due to a bus simply not turning up 🙈

I had to change at Hull for the Manchester train so had time for a sit down in the warm at Hull with a cuppa….before boarding the ‘delayed’ train to Manchester 🙄…….

The early morning sky showed a distinct ‘sitting on the fence’ look about it as we trundled past the Humber, undecided about our fate on sunny or rainy day……. 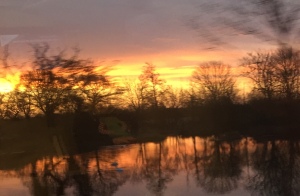 After changing in Manchester, I arrived in Chorley to find Lou waiting for me in her Christmas jumper as promised and we chatted  happily on the short journey to the Town Hall, where the event was already in full flow and Dave from Mindset was talking about depression…….

He spoke of celebrating getting out of bed when you don’t have to…. We need to take time out to feel proud of ourselves for the smallest achievements – small baby steps can build momentum. Negativity comes natural, positivity comes takes practice.

On the back of his shirt was:

“Master the Mind, Master everything”

“You are not weak, the journey is just difficult……”

I’m glad I saw even a small bit of his talk…….he talks to school children about mental health issue too……wonderful….

I was sat next to Teri from Twitter….and she had the most amazing Christmas dress on…..

The event was called:

“The Great Christmas Get together” and many had Christmas written all over them with jumpers, antlers and lights galore…the table were bedecked with Christmas and the event was for all staff and some of the volunteers in Lancashire…

Part of what I said was:

“If you do live with someone with dementia, or care or visit someone, don’t disable’ loved ones before they’ve lost the capacity to do something – for the kindness of reasons you often do something for the person but if they don’t do something day after day, we forget and then you’re stuck with doing it for us. My daughters use to do loads of things for me in the beginning – for the kindest of reasons – they’d help me with my coat on for example – but I could still put on my own coat. If I suddenly stopped and allowed them to do it, within a few weeks I’d forget how to put on my own coat. I told them that if they continued they’d have to come to my house every time I wanted to go out – they stopped immediately.”

After me was Cheryl, from the People Department of Age UK,  who gave me my very own bauble, with  my name of one side and ‘Thank you’ on the other ❤️…..staff had been given a special bauble for the day and I was given my very own…..❤️ 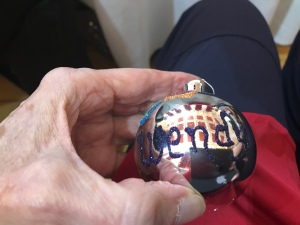 Remember Age UK work with all older people not just people with dementia, although they have opened a Dementia Hub, as Lou was telling me in the car……Cheryl spoke of appreciating everyone as an individual….everyone’s experience of life is different. Staff are just as important as the people they care for at Age UK…

Just like I always say, the path we choose to take can make or break us…….she ended with

We were entertained during lunch by the “Elderly brothers’ 😂🤣😂….who played lots of lovely music, rock and roll and I sat at my table and sold all my books I’d managed to take……..people came and chatted, telling me their own personal stories….always nice to hear…….and one person said…”You’ve opened my eyes..” ❤️

As I trundle back to my table with an empty little suitcase, Lou and Teri got me a cuppa and some food ……

Lots of people came up for a hug and Staff were all dressed up Christmassy and were being judged for a prize later, one of my books was up on the raffle, so those who missed out were hoping to win it instead 😂….

I had to leave soon after a lunch and I was missing so much fun!! An Indian dance group, videos and judging of the Fancy Dress!!

But I had to leave to get home at a good time sadly……….

A great organisation, and a day of celebrating their work…..one person said to me

“I’m only a volunteer….” No charity can exists without volunteers……everyone in every organisation is as important as the next……and sadly time for me to leave….and Lou was taking me back to the station…

People attend events like this, they arrive they leave, they moan they enthuse about it……but never forget how much work goes into such events, how much planning, how much stress is involved until it’s all over…….this was a wonderful event, very well organised, with lots of different ‘stuff’…….sometimes events forget to have ‘different’ and this one had it in bucketfuls……..well done Teri Stephenson and your army of staff…..I hope you enjoyed that glass of well deserved wine when you got home…⭐️⭐️