Many months ago, the lovely Philly Hare had asked if I would like an adventure to Italy to speak……😳……Sarah could come too…….I purposely didn’t think too long before saying yes…..what Philly had actually said, was do you fancy a trip to see the Alps and Lakes of Northern Italy…….it was the thought of the views that did it 😂…Philly knows what attracts my attention🤣…..

I was due to go to Italy last year, but the organisation had been so poor, leaving me feeling very nervous, that I pulled out at the last minute. So it was because it was Philly organising it this year that I felt more at ease.

We’d been invited to a conference in Pinerolo…….on Thursday evening I’m in conversation with Neurologist, Dr Schiavo “see the person not the dementia’……and then the actual conference is Friday and Saturday ….Friday Philly will have me and Sarah on stage in conversation and Philly has her own piece in the afternoon …..

So the adventure started off at silly o’clock Wednesday morning with a taxi ride to the station. Sarah was meeting me there. It felt very strange not having my haversack, not having things in the usual place……I even didn’t have enough money for the taxi driver as I didn’t have my normal purse! I’d put the right money in my pocket, forgetting it was £1 more before 6am, but he let me off…..his face was soooo funny when I said why……”ooo I’m sorry I’ve not got my purse as I’m going to Italy….’……silence while he thought about it….then “ITALY?” 😂🤣😂………

Anyway, the train was on time, we txt Philly and she was also en route……

I’d been worrying about the trip. I know I had no need as I had 2 ideal people supporting me, but I suppose it was the unknown, the unfamiliarity. When I’m in the UK, if things go really haywire, I can simply get a train home….a plan Z……but abroad, that wouldn’t be the case. If I get lost here in the UK, I can ask a smiley face to help…..my Italian is almost non existent, so my options are limited. I suppose it’s the vulnerability at it’s highest that worries me….

As we trundled along it suddenly occurred to me that this was the last I’d see of the countryside for a while….my trundles would be a very different vista…..

We arrived at Kings Cross to be met by a smiley Philly and trundled to Gatwick…….that’s where the chaos started 😱……the airport loo was the first problem…..like being in a cave 😳….the signs were then very confusing and we seemed to go through a maize of different places…..to sort the boarding pass……then ‘assistance travel’…..🙈…

“take your coat off, take your bag off, where’s your boarding pass? where’s your passport?, sit in the wheelchair, ”….soooo many questions rattled off requiring answers, instructions given for me to follow…. I didn’t have a clue where I was or what I was doing or where anything was…….🙈…Philly and Sarah told the woman several times to slow down her questioning but it fell on deaf ears….

The 2 chinks of sunshine arrived in the form of a random man called ‘Mitchell’ who was lovely and the woman that scanned me that took everything calmly and gently…….

We all thought we could go through together, but the argument Philly had to have and then me saying I have dementia was ridiculous……..”Rules are rules, we can’t change them”…. 🤯🤯🤯

The stress I felt under was overwhelming……once we’d been plonked in the ‘waiting pen’ Philly and Sarah went to get cuppas and a sandwich…..they came back and said:

“Anything would taste nice after what we’d been through”🙈😂……..

Suddenly a customer service person came up to us asking about our experience of Assistance……..

“Sit down and make yourself comfy, how long have you got?’ I said, patting the seat next to me….😂🤣

We did include Gatwick airport in a tweet saying how stressful it was and they did come back asking us to feedback, so that will be our next mission…..

The boarding bit was the best bit of the experience ….. straight on in the quiet empty plane…before the chaos of passengers, but we were all snug and seated……..

The take off was perfect and views to die for, floating above the skies in this metal box….

Before long we were high in the sky and pure white cloud was all around……and then the snow covered Alps appeared and were awe inspiring….. 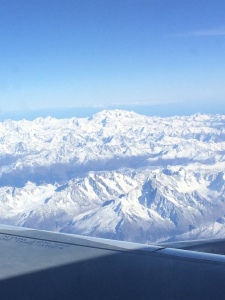 We had to wait for assistance when we landed but we then whizzed through and Molly was waiting with a hug for us all……..and we drove chatting happily with more stunning views

It was fascinating to here about the system in Italy. Healthcare isn’t free here as you have to pay per test….a gp’s role here is much more like a triage nurse – they’re referring all the time….Molly is a social educator but to become this you have to a medical qualification. So that’s why social care is a difficult concept here as roles are filled by medical staff. So to make social care work in Italy they have to prove the medical value.

Molly is responsible for Dementia friendly communities….and is the person advocating for people with dementia and their inclusion in everything created.

The hotel had had awareness sessions and it immediately showed as we stepped inside. Signage everywhere in Italian and English. The friendliest, smiliest of staff who couldn’t do enough for us….and a lovely room with views of the mountains….our waiter over supper was amazing, funny and charming…..what more could we ask for……a wonderful end to a traumatic long day….