I’m often asked if I’ll try things in the hope that I’ll like them and write a blog but I rarely say yes to such requests as I feel a tad used. However on a couple of occasions I’ve said yes, simply because I can see it has the potential to help many people. So it was for this reason that I said I would test the Guardian II Watch. It’s potential seemed huge on the face of it. The ability for supporters to retrace and track our whereabouts, our heart rate for health issues etc. So when it arrived in the post I was really excited to get going with the trial……..so here’s my thoughts, written as they happened, so maybe a tad random…. 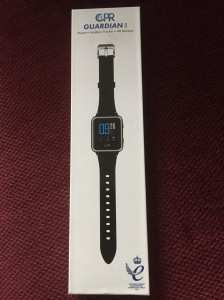 I got in a bit of a pickle setting it up…..I didn’t realise that I didn’t need the app…..it was my daughters or those needing to keep tabs on me who needed to do all that bit but the watch had to be with them. I suppose they imagined someone else would be setting up and not me! 🙄

However, I went on their web site and had a lovely on line chat with their technical support who helped me through it. It was far simpler than I’d made it. Might have just been good if the instructions had been a tad clearer at the beginning about who needed to download the app……

I’m not sure it’s made for someone with dementia to benefit from but I can see how it’s potentially useful for those supporting someone….. I thought I’d be able to see where I was on the watch, but I have to go on the app to see that.

I wish it wasn’t black…..black is such a bad colour for me – the red emergency phone button is good, just not the black…..

Steps don’t appear to be accurate at all….i know my routes and I know my steps and it was often way out.

So all in all the benefits come for those not wearing the watch, that is if it works how it’s suppose to work….

Once I got used to how it worked I began to understand it but it wasn’t intuitive for me.

When Sarah loaded the app it still wasn’t clear and we added the device but it still said add device when we tried to load it again it said request already made. The Home screen simply went back to ‘Add Device’…..we deleted the app……when Sarah tried to log back in it said ‘user did not exist’….🙈

The one thing I liked was the red button which can instantly make a call to numbers you enter in the phone, like my daughters in my case. But it was acting like a back button….i couldn’t make it call anyone. Found out you have to press and hold down the red button.

All a tad confusing……

In the instructions, to set up it should have – If you are the wearer, do this or If you are the supporter do this…and they did listen and accept that would help….

The heart monitor doesn’t seem to be accurate all the time. At one point it said my heart rate was over 100 but when I took it at the same time, it was 70 – which could obviously cause a panic when it’s not needed. Sarah, a nurse, also took my heart rate…..totally different reading and potentially could lead to action being taken when not necessary. The pattern overnight and during the day were quite similar and didn’t’t seem to make sense

Having to charge frequently might be a problem – it says every 2 days, but I had to charge mine every day ….but it does send you messages to charge which is good and buzzes on your wrist.

Ideally It needs a one click to find real time tracking. You can compare it to a poor website that’s hard to navigate. When you need to find where someone is walking and the direction, you need it immediately. Supporters lives are stressful enough they need simplicity whereas this creates anxiety in its complexity and delay.its downfall is its complexity. 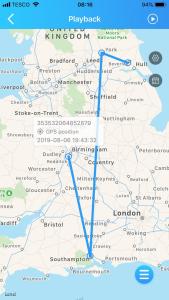 Its not actually tracking me as it goes in a straight line as the crow flies. Not intuitive where you find thingse.g to click on a plus sign to find tracking. It only joins the dots of each point located so thats not really tracking to me.  If i went for a walk at 3am there’s nothing on the app that will help anyone unless maybe they happen to be looking at it at 3am

One day I went to York but it only said I went to Market Weighton and then another day it said I stayed at home when I went out on the bus. 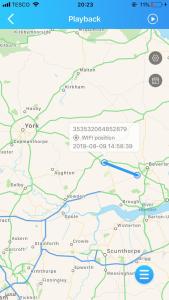 So …….all in all….if it did what it said on the box it would be excellent, but quite simply ….and sadly…….it doesn’t…….I wonder if people with dementia and supporters were involved from the start in the creation…..🤔

Anyway, I sent this part of the blog to the company in order for them to have a right to reply and admittedly they did seem very surprised at all the problems I’d had. In the end they asked if they could send me a replacement to start again, which I accepted. It also had a blue strap 👍…However when it arrived, me and Sarah decided that we would set it up as they intended with her as the set up person. But this is where the trouble started again…….

We followed their instructions to ‘unpair’ the old watch, but then it wouldn’t recognise either of us as the ‘admin’ person. So I had to send the company of a screen shot saying that set up was ‘processing’ but going nowhere….🙈. We couldn’t register as new users and it was as though they needed to totally take us off their system and start again …….

Support came back to my email quickly and suggested they set it up for me – not quite what I wanted but our patience was running out.

However it worked, although it did tell me I was in China one minute and home the next

Another day arrived I was back in China again 🙈

The walk I did around the village didn’t track correctly

After they’d done a check on my phone they emailed back to say it had been connected to the persons international phone and they’d forgotten to remove my new watch from the server…..It’s definitely not tracking me every 10 minutes as it should do.The map it then gave wasn’t correct ….

Sadly also, I was back in China 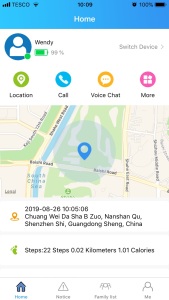 The company decided to send me a 3rd watch……..I’d suggested the time zone was incorrectly set, which they agreed, which is why I was appearing at my daughters at 4am in the morning 😳🙄…..and why other strange things were happening time wise.

I decided it might be 3rd time lucky, but sadly we weren’t impressed. It had me travelling to venues several times back and forth when I went once….. 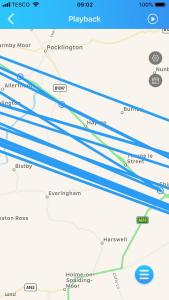 my heart rate still didn’t seem right and the steps really weren’t right. The final straw was when it showed me back in China or Japan or somewhere.

Fair do to the company they did try and fix the bugs and listened to what I was saying. What I hadn’t realised was that it was already on the market and being sold for £200 …….when I said this they said they hadn’t had any come back from any other customers.
However, I pointed out that perhaps customers would believe what they were seeing. They weren’t trialling it. I scrutinise everything when I’m asked to test technology, so I never believe what I see. But the unnecessary worry it could cause if others have similar or even lesser problems is not on…if you pay that much, you expect perfection….

Would I recommend this watch – certainly not at the mo. If they sorted out all the gremlins and it worked as it was suppose to work, it could be perfect and just what we need….…..it’s another case of ‘involve us from the start of the seed of the idea to avoid issues”……

9 thoughts on “My Trial of the Guardian II Watch…….”