Yesterday I had a trundle to Halifax – don’t think I’ve ever been there before 🤔…..

A lovely playmate of mine, Julie Hayden, set up a DEEP support group for people with Young Onset dementia in her area, because, once again, there was nothing……..

Julie had contacted me a while ago to ask if I’d attend their annual awareness event which also happened to be their 2nd birthday!

Originally it had been planned for next week but then I got a sudden unexpected invited to speak in Italy 😳….did I just say that……gulp🤯…….but more of that next week……

Anyway we managed to switch and change things around so it fell on their second birthday instead, so was meant to be….

The sun was shining on the world when I opened my curtains…..but the taxi driver was late….I rang their number as usual, and my lovely phone person at the other end knew it was my number, said ‘Hello Wendy, sorry he’s late but you’ll still be there in time for your train’….all I had to say was ‘Thankyou’……perfect….wonderful when people are prepared to understand…..

He was a very chirpie driver, who sang ‘Mr Blue Sky’ all the way there and we arrived with 5 minutes to spare…..⭐️

I then looked at my email from Julie and we’d agreed for me to be met at the station at 13.24…..I seem to get numbers in a pickle of lately and had actually left 2 hours early 😳🙈🙈🙈🙈……but when I got to Hull, my train was mega delayed so for once it didn’t matter 🤣

I tried to add 10 to 38 and came up with 58 🙈 but knew something wasn’t right……maths was my strongest subject at school…😔…..numbers so often become a problem for people with dementia and that seems to be becoming the case with me…..me thinks it’s because I travel nearly everyday, that I don’t panic. I txt my daughters just in case I forgot to tell them this latest issue and Gemma immediately txt me back asking if I needed to FaceTime for help but I’d already found a smiley faced guard to help me…..if I didn’t travel often it may put me off travelling……..

Anyway…….the sunshine over the Humber cheered me up 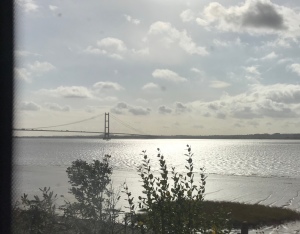 The chaos didn’t stop there as, due to the train being mega delayed  they decided it would terminate before Manchester, so lots of travellers were looking for that smiley face again……..her smile was tinged with fraughtness by now……..🤯

I arrived in Halifax, watched the world go by for a while, due to my timing and was soon met by Rosie from the Alzheimers society who was having a stand at the event. We ambled along and a few minutes later  were in a wonderful renovated church  which has now been converted to a community venue where they have a theatre, café and many rooms……..and of course my first task was to have a hug with playmate Julie 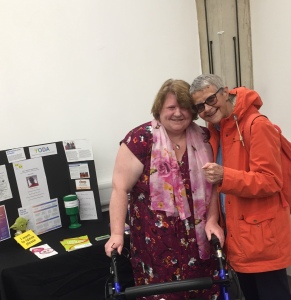 It was an event specifically aimed at highlighting Young Onset and I was hoping word would get round that Julie’s DEEP group exists…….the Mayor arrived as did some other helpers. We were hoping the weather wouldn’t put people off, but you just never know at these events…… 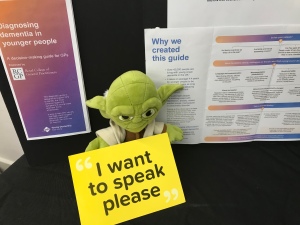 After waiting and waiting, it was obvious that people just weren’t going to arrive. I felt sooooo sorry for Julie……people put in such hard work organising events and when people who promised they’d come fail to turn up it must be so disappointing. I don’t mind….it happens. You can’t force people to come and listen…….but my heart sank for Julie……….

So instead of what was planned we simply sat and chatted and that was nice in itself. It also meant I could catch an earlier train home which is always welcome. However, arriving at Leeds I found more chaos, more cancellation, more delays……so my ‘on time sardine’ train didn’t seem too traumatic……….🙄