Sunday saw me trundling down to Leicester ready for a conference on Monday.

Matron, Jenny Kay, had emailed many moons ago to ask if I would speak at their Univeristy Hospital Leicester ‘Champions Celebration’ Event 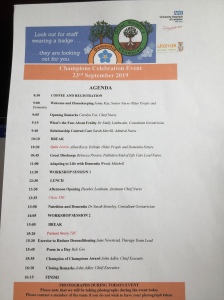 It looked such an interesting programme, from nutrition, relationship centred care to a ‘exercising to reduce deconditioning to my bit on adapting to life……

I’d had a discombobulated sort of day on Saturday as nothing was right – my routine had disappeared due to a cycling event in Beverley. So buses changed routes, no market, the town was quieter than usual – totally out of routine so I just became confused. So when I woke Sunday morning, I felt exhausted from the previous day, having had to work hard at sorting out the day….sounds silly but that’s just how it is….

The taxi man was super late……as soon as my time arrives I’m on edge wondering if it’s me that’s forgotten to book and I don’t like using the phone and get in a pickle. But my taxi company recognise my number, so I don’t have to say anything as they do the talking…..
“hello Wendy, sorry he’s a bit late but you’ll be fine for your train. He’ll be there in 5 mins”
And all I have to say is ‘Thank you’…..

I don’t usually like travelling on a Sunday as the trains can be doubly awkward but the first to Sheffield was on time…..surprisingly………..and the second 😳……I was soo tired that I fell asleep on the first train, but no panic as I was going to the last stop, but the second, I had to stay wide awake as I didn’t know the route. I’d typed notes of stations before mine, how many and how many minutes before mine and the one before…..and solitaire kept me company…

They’d booked me into a quiet Premier Inn near the venue and just a taxi ride away and as soon as I got there I was grateful for the silence and just closed my eyes for a while……..

The following morning, they’d arranged for a taxi to pick me up and take me to the venue. The taxi driver was obviously in Monday morning ‘I don’t want to be at work’ mode…..he didn’t help me, he didn’t say hello, he didn’t ask my name…he didn’t even move from his seat……😔

However, when I got there someone greeted me with a smile and helped me out and many people helped me from then on – all with smiley faces 😊

Jenny started off the day welcoming everyone and talked through the morning agenda and surprised me by putting me down as Doctor Wendy…😊 The audience was made up of lots of different specialities, all with an interest in dementia…. 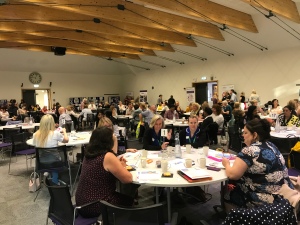 The opening remarks were by Chief Nurse Carolyn Fox……celebrating great practise was the theme of the day, sharing across professional groups.

Dr Emily Laithwaite, consultant geriatrician was up next talking about:
“what’s the fuss about frailty?”

She spoke of age just being a number and you can now no longer talk about patients age. She has many 90 year olds who are very active yet frail 55 years old……..those who are frail talk of not being able to do the things they use to and taking longer to get over illnesses….mmmmmthat sounds familiar 😳
Frail older people may prioritise outcomes differently – comfort over functional recovery so she encouraged everyone to ask the patient “what matters to you?” 👍

Nurse Natalie then spent 10 minutes talking about her nan…..her nan who loved a hug…and loved music. The idyllic life changed in the last 7 years once she was diagnosed with dementia. The cover up and paranoia, the confusion and differences…..but “her kindness still shone through”…..❤️ the story showed the unfair hand we’re dealt some times and the wider emotional effect on the whole family – wonderful ❤️

Before the break there was a poem from Rob Gee – their resident poet for the day……he was very loud, spoke very fast and animated but I imagine was very funny……😳

After a cuppa was a quiz from Older people and Dementia Sisters……..all around food….got everyone chatting and was good fun ….including what image appears on an HP sauce bottle?………..😊 Ha! That was very good…….very different…😂

Next up was Rebecca and Karen, Palliative Care/end of life lead nurse to talk about ‘Great Discharge”.

It was me up next and I spoke for about 30 mins on anything and everything including the importance of their language and body language:

People kindly came up and bought my book before heading for the first Workshop of the day…….I stayed in the same room so I didn’t have to find anywhere so listened to Elizabeth Hillman”

James Parkinson in 1817 wrote about “an essay of shaky palsy”. With Parkinson it’s more common in men than women….They don’t really know why people get Parkinson’s and a tiny percent is hereditary. Sometime they can hazard a guess but it’s all if buts and maybe…..she showed faces of people in the media – Mohammed Ali and others……and then asked the audience what they knew about Parkinson’s before showing the symptoms

She then went onto explain how might their hospital experience be improved….very similar to people with dementia ….
She spoke of ‘on/off’ time for people with Parkinson’s. Medication can have a big effect – missed or not working correctly. People can suddenly stop moving, freeze on the spot, the thought process not working and by talking and saying 1,2,1,2 it can help them start walking again – bringing about a change in thought process. They can run in a field but freeze on a ward as there’s so many obstacles….
They can often not walk forwards but can walk backwards and sideways, so often follow a pattern on the floor.

We now know it’s far more than a movement disorder that James Parkinson spoke of in 1817…..and just like dementia, it’s nothing to do with age…….

I sold the last of my books while people were getting their lunch and we were also given the treat of the Rock Choir singing to us – very happy music while people ate 😊 and another song to start off the afternoon…….and were introduced by Heather Leatham, Assistant Chief Nurse…..after a very short video clip called

“The difference between Care and Caring” very poignant …

After all the singing and dancing it was Sarah Stoneley – Consultant geriatrician and Dementia lead, talking about nutrition….. “Food for thought” .

There was a slide showing what they can do to help

Forgetting to make food appetising – serving portions that are too big are pointless – so they try to serve smaller finger food. Oral issues can be constant and prevent people from eating yet oral hygiene is often forgotten. Give patients TIME and allow them to experience the joy of eating and drinking, when upright, awake and alert with food they like or want – large or small.
“Never assume that appetite loss is being caused by dementia.” 👍

Family and carers should be invited to be involved…….patient priority is often different from medical – listen to the patient and family – a nice way for my brain to end typing…….sadly I had to go before the end ….

But not before I went to the last workshop on Mindfulness for staff, where they showed this wonderful slide……wonderful ❤️. 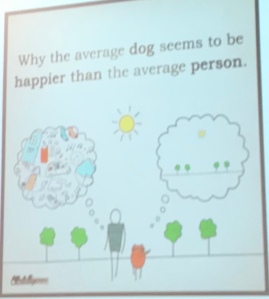 A wonderful day, with wonderful people who looked after me well……bonus 😊

6 thoughts on “Talking to healthcare professionals in Leicester…….”