Yesterday, I needed something to do on my trundle as I was feeling anxious from an event the previous day. I’d woken with a headache and feeling discombobulated, needing assurance that normality DID exist…. So I thought I’d type a story as I was trundling to paradise for my last visit before winter…….just to keep me occupied and calm my head…….

It was a beautiful September morning and the sunshine had put the taxi driver in a good mood too. It’s not long since his wife died and he often has a sad aura surrounding him, but today, the sun had brought a smile to his face.

He died me off at the station, which is also where the taxi cab office is situated and I’d decided to take them a box of ‘Heroes’ crocs instead of the usual biccies. I’m not sure what happened at the weekend but they’d sent me a taxi at 06.10 Sunday morning when I was fast asleep instead of Monday. It was probably my fault as I’d booked quite a few taxis and often get in a pickle, so they were to make amends. They were gratefully received and all thoughts of diets quickly disappeared………

The first train was on time 🙌……and the trundle to Hull was uneventful. Two fellow passengers also had walking shoes on and were looking very happy and relaxed. I wonder where there paradise might be?

The Manchester train was also surprisingly on time….😱…..I’d even scanned the information board for a plan B assuming I might need it, but not today……

It was a more respectable time of morning when we trundled past the Humber and the sun was in the perfect position to have it’s piccie taken……..even making the murky water sparkle and glisten

Once past Brough, the familiar sheep were basking on it’s banks

Selby, Leeds came and went and then onto the climb towards the Pennines. Fellow passengers, some busy working on laptops, others enjoying the views. A hum of conversation of peoples lives divulged in a snapshot. Two men comparing home lives, moans of teenage antics, long working hours and wishing for the weekend. Another on the phone oblivious to his loudness in revealing office secrets, of others, the sigma earring and disappearing and the continual sound of ‘hello’, ‘hello’…….

Never ceases to amaze me how much people divulge on a train…….amazing the conversation and snapshots you hear of peoples lives on a train…….maybe they think they’re safe as they’ll never meet those people again, or maybe they don’t realise they can be overheard…🤔

As I look out of the window, the skies are filled with aeroplane trails, Leeds airport being close by. A plane full of expectations of a wonderful holiday to come or bring home memories of a holiday just taken….?

Dewsbury, Huddersfield…..the streets full of cars and people going about their daily life. Are they happy or sad? Is it a good day for them or bad?

As we pass by houses with washing on the line, gardeners at work, I often make up stories in my head about that moment in their lives that I glance in a second……who knows what tragedies or joyous moments are occurring or simply a mundane normal existence is happening as I trundle along my way fleeting past peoples lives……

You can feel the train start to climb, like a roller coaster, climbing out of Yorkshire and dipping down into Lancashire……..as we crossed the Pennines from East to West…I love this trundle, the views so calming…through tunnels carved through the Pennines which never cease to amaze me .. 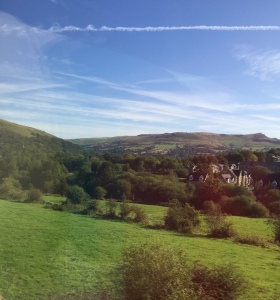 Arriving at Manchester, the train spotters huddled at the end of the platform with flasks and sandwiches for their days recording, I’d left my self plenty of time to simply sit and work out the next step and went outside away from the crowds and it’s always sombering to see this statue entitled “Rebuilding Lives after Sight Loss”

My train to Penrith was also on time!! What is happening today!!

The passengers were quieter, all sat alone, deep in their own world. Some brought out their sandwiches, reminding me, maybe I should eat…so a packet of crisps filled whatever gap there might have been….I’m probably eating far more crisps and biscuits than I should, but they’re simple to eat…
The skyscrapers of Manchester disappeared as we headed towards Preston, Lancaster, leaving the Industrial north for Oxenholme, which is called the Gateway to the Lakes’……and also means the next stop is Penrith 😊

As office blocks and the hustle and bustle of busy cities and towns turned into fields and animals grazing leisurely…..I began to feel calm. Their presence turning the discombobulating head into a quiet zone of peace…..I could ‘feel’ paradise approaching….and this view is always a sign of it’s approach…. 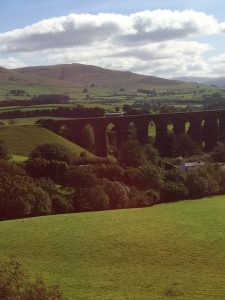 The arrival in Penrith was, again on time 😳….I could have shown you a hundred photos more of the route there but, after a short wait for the stunning bus ride into Keswick…I’ve the delight and anticipation of ……my favourite view of all……. 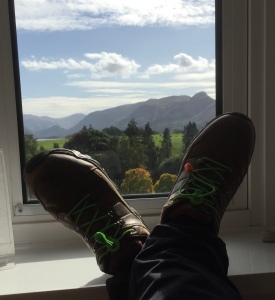 Did you notice how all the trains were on time 😳……maybe I should write about my trundle like this more often….🤣😂 hope you enjoyed my journey as much as I did…

Oooooo I know I said ‘last visit before winter’…..but……..they say Keswick is lovely when they switch on their Christmas lights and I’ve never seen paradise dressed in it’s winter finery………..maybe…just maybe…..……..you’ll hear about that……