Yesterday saw me trundling early doors into York for the 3rd session of our Good Life with Dementia Course.

On Friday I met 3 lovely sisters in York; one who lived there, one over from Canada and the third, diagnosed in February, who was over from her home in France. They’d asked via email if I’d meet them in York for a cuppa and a chat. They were wonderful people, all doing their best to come to terms with a diagnosis and finding ways of understanding . I invited them along to Tuesdays session but sadly, Sue was on an early flight back to France that very morning. I was the first person with dementia she’d actually met in person as they don’t have groups like Minds and Voices in her part of the country and internet connection is very poor so I left them feeling very fortunate and lucky to have all my virtual playmates as well as in reality.

No one should be alone with dementia……..😔

Anyway, back to the fortunate me and I got up to a rainy day which definitely had an autumnal feel to it, but by the time the taxi got to the bus station, the sky was looking promising for the day ahead

Week 3 of our course was all around Adapting and Relationships. Me and Damian had talked about the flatness of last week and were both determined to make up for it this week.

It suddenly occurred to me that Damian went to set up and then came to pick me up from the station, so yestretrday we got our act together and he picked me up at 9am so I helped or hindered him to set up!

But then must have taken a wrong turn and everything looked wrong…..lots of road works and noise…..so I was in a bit of a pickle, not knowing where I was……but I didn’t panic, I just followed the river and knew I’d come out somewhere close….and I did…….AND breathe……..

Damian picked me up and we set everything up before people arrived.

Tutor this week were me Eddy, Brian, Eric, Elaine and Brian…….

Everyone started to arrive and chat and laugh and catch up………❤️

We all went round and said our names again and then I started off the conversation about the importance of the person and those around them. When we get the diagnosis so do those around us and both parties need help and support from the beginning and that’s what missing in the diagnosis process. If the beginning is a confused mess, the mess will become more tangled……….I spoke about the advantage I see in living alone as there’s no one to move things around……to which Elaine piped up

The changing roles, when someone who has always, for example, done the driving, now suddenly can’t………”It’s demolishing a lot of what we’ve always done..” so it’s hard both ways

“It’s not life threatening so I just get on with it”…….said our learner who lives alone…..

“The whole aspect of your life as a couple changes, it’s a huge learning curve’

“Technology is making life difficult for me – I can’t do everything online,

People shouldn’t be disadvantaged simply because they don’t have or use technology……their comments put a new perspective on technology….

Such great discussion on issues suddenly arising that were never thought of or mentioned at diagnosis, people simply don’t know how to deal with it…….if all this was dealt with at diagnosis, how easier the transisition would be……

We watched Damian’s ‘Getting Along short 5 minute film, where couples explain the issues and talk….people with dementia don’t want to be defined by their dementia and carers don’t want to be defined by that title either – they’re husband and wife……..frustration and lack of knowledge impacted on relationships. So important to challenge misconceptions, to talk and give those in relationships the chance to talk through problems without it causing friction……

“When you’ve lived with someone for 50 years, and done things the same way, it’s hard to adapt” said Eddys wife on the film…….

Damian said he met many couples “Falling into traps that dementia sets and tearing couples apart” and this is why he created the ‘Getting along’ sessions. Identity is often lost or changed when dementia arrives.

The partners can often look into the future and see a totally different world to what they were hoping for and go into denial and sometimes the person with dementia goes into denial simply through fear.

“The demands of the house, and just everyday living comes into question”…my wife has found it difficult to come to terms with……

I said ‘ If services were suddenly to fill the gaps that are missing, it would cost billions in their eyes  as so much is missing, but if they looked at services differently they would see that the cost of referring to our course, for example, is cheaper than anything they could provide and nowhere near as beneficial”

“No one asks you how are you coping with the dementia” whereas if you’re diagnosed with cancer, everything is put into place for those that want it, support, counselling, it’s all covered ………dementia is forgotten in the grand scheme of things….

Those of us who are single said it was great as we don’t argue with ourselves, we don’t have the guilt and we can do what we want without being criticised.

“Marriage is like a pack of cards, you start off with hearts and diamonds and end with clubs and spades…”🤣😂 all the one liners came out…..

Once you’ve accepted it you can do something about it, but it must be hard for those in denial, or don’t accept there could be

“Ive just been talking to him in the pub, he can’t have dementia’

Before we had a round up I spoke about not forgetting the children in all this as if they’re not included they’ll make up their own idea of what’s going on which might be far from the truth.

“Nice to have everyone’s views’

And in the blink of an eye, the 2 hours were up and I can’t believe I let the tutors all disappear without a piccie. But I managed to Eddy and me and Simon, as it was his last day with us before flying back to Belgium…

Last we we went a bit flat….whereas this week we got back on track and we had wonderful conversations……….everyone was animated and willing to share their experiences, good and bad and everyone seemed to feel better for doing that……..

It’s always exhausting yet exhilarating doing our course so I often fall asleep on the bus home…..but with views like this…..it’s no surprise as it’s a very calming trundle home 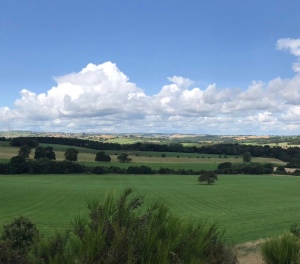 8 thoughts on “Week 3 of our Course – Adapting and Relationships…….”