I’ve had such a quiet weeks lately …..only one trundle this week that happened to be yesterday…..
People have said maybe it’s the quiet before the storm…..but I prefer to have a steady continual drizzle. A long period of quiet followed by a full diary is so hard to get through. Dementia lulls you into enjoying the peace. It tries to strip from your memory the process of ‘doing’……’not doing’ becomes relaxing, becomes the norm, becomes a joy……☹️

When I say ‘doing’ I’m talking about being involved and having your mind stretched by the planning and travelling; different conversations in different environments.

I’m not saying I’m bored and have nothing to do, as I always make myself ‘do’ something. But being involved with professionals stimulates the brain beyond simply ‘doing’. You actually feel the door being closed on dementia…..never fully locked but closed enough to prevent it seeping in and wrapping itself around me…..

Some might say that what I’m describing is ‘employment’ but I could never do a regular job as that ability left me years ago. I’d be unreliable, inconsistent and a liability which would do me more harm than good. So we’re trapped, trying hard to keep ‘doing’ but reliant on others asking us to be involved.

It’s been a struggle to keep motivated this last couple of weeks, keep dementia at bay. I’ve had my eyes closed a lot and been tired most of the time..simply because I havn’t been ‘doing’……never good…….

So yesterday I had a meeting about a new research project………

Cathryn Hart picked me up from home and drove us to the lovely bunch at Willerby…..
I couldn’t for the life of me work out why I was going so Cathryn filled me in on that bit too🙄

We arrived to find the lovely Alison with my cuppa tea in hand all ready…..I did take a piccie but then realised I had Cathryns notice board for all to see behind her!

And so I sat happily at the table in Cathyns office having my cuppa and looking at Cathryns happy board of all her staff……. 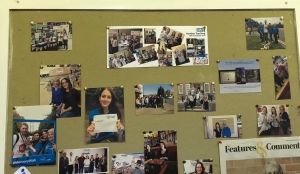 We were there to meet Mark Wilberforce, a researcher from York University to hear about his new project and me possibly being involved.

NIHR and many other organisations are putting far more emphasis on public involvement, which is wonderful, but I’ve come to the horrible realisation that this is back firing on us on occasions.

I’ve had several emails lately asking me to be involved and I’ve turned them down or they’ve not replied when I’ve asked for the finer details . I’ve heard from other people with dementia and what has made me sad is that they have been so grateful to be asked that me thinks they could be used in some circumstances simply to get funding.
I had one email that asked me to be on their steering group and when I asked the usual questions around the detail, I was told ‘Oh it won’t involve you doing much at all. We just need names on applications to get the funding……’
To think such things is appalling, to state them is unforgivable. Some researchers have a lot to still learn sadly……needless to say I turned them down….

We’re all different in the extent we want to be involved and all are important.

Anyway, off soapbox and back to yesterday…………

I’d had a long email discussion about my involvement and was more than happy that Mark gets it and the fact that Cathryn knows him made me feel comfortable………..

It’s finding out why they refused care or find it difficult – is it the way it’s being delivered. It’s easy for care workers to say they’re a ‘difficult person’ or ‘refused the visit’ and they go onto the next person. The cycle then starts again when new care workers appear on the scene again.

Support workers (some areas call them Health Care Assistants) are one of the biggest resources in mental health trusts. They’re not qualified, they’re cheaper, but the big factor is, they have more time than Home Carers. They have that bit more experience than home care staff because they can be used to people with complex needs.
We think they’re able to build bridges because they have more time and knowledge.

The outcome of the project is to come up with a manual for Support Workers to enable them to know where the fine lines are, where things become counterproductive.
The resource will be used for support workers to help them with social care. Support workers in mental health teams tend to stay in their post but care home staff tend to swap and change.

It’s being funded by National Institute for Health Research and the final go ahead for this qualitative study should be in the summer……nice to be involved in something early doors.

After Cathryn took me home I was on Billy duty, so trundled along the back lane of the village bathed in sunshine….

And let Billy out for his afternoon trundle of his patch……but it did involve him trying to follow me back home for a while…….