Those who know me, know I write my blog in real time, however, yesterday, I did this as normal but on the way home realise what a shambles this had been. ONce again the Department of Health have got the process wrong. So the blog does start off in real time but then on the way home, I deleted the end and wrote my opinion on the process that should not be repeated……..

Yesterday I was invited to my least favourite place….the Department of Health at Quarry House in Leeds.
I’m not very knowledgeable on the politics of political papers – Nigel, Chris and Jayne in Wales are the experts on all this…….however, I knew it was important if I could get there simply to have the voice of people with dementia heard ……whether they’d be listened to, I’m not convinced, but we have to try…….

So then I txt Hannah from the Alzheimers Society, who was already in Leeds to see how things were…..the meeting hadn’t been cancelled and she could hear trains going passed from her hotel window……😂

My taxi wasn’t due until 9.45 so I had time for the blizzard outside to stop and the trains to get sorted🤓 My taxi was mega late, but I’d expected that and always allow 30mins when I only need 15……and my lovely taxi people always know I’ll ring when they’re late and they’d checked my train and although the car was late, so was the train👍

In theory the late train should still have got into Hull in plenty of time, but many passengers stood helpless on a stationary train outside the station while a platform became available……….yup, it was our connecting train that we saw happily pull away without us…….🤦‍♀️ so we had another hour to wait……..

Anyway, back to the day in hand as the next train to Hull was ready and waiting when I arrived….the journey gave me chance to read and make notes on all the papers. It was, in theory, going to be a Question and Answer session and we had been sent the questions ahead of time, so far so good…..the questions were around, Meeting Needs, Planning for the future and Improving the system.

It was amazing how when you cross the Humber you can forget about the snow on the ground…..

But it always looks pretty…..from inside… 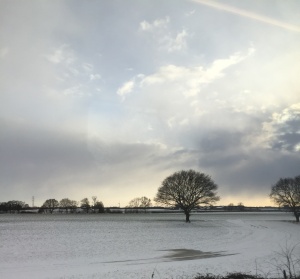 I arrived and  met new playmates Pam with dementia and her daughter Joanne who have just set up their own dementia group for young onset near Preston.

Once people had arrived  we started with introductions.
Amelia is working on the green paper on Adult social care from the department of health, Rosie and Hannah from Alzheimers society, Joy Watson, Joanne Roberts and Pam and Cathryn from the dementia and disabilities team at Quarry House

Amelia started off by explaining why we were there and then followed an hilarious 5 mins of trying to get a cuppa tea out of the hot water flask………we didn’t …….couldn’t make either work……no one could………😱😳😱…..the meeting couldn’t continue until I got my cuppa tea so health and safety went out of the window, flask was open and hot water was poured into cups on the floor with the flask open……….

Cuppa tea in hand so first question could happen and was around how dementia affects us on a daily basis – I said how it affects us 24hrs a day, it depends what we’re doing when, how we’re feeling. One size doesn’t fit all.

The system is set up to let people ‘exist’ not live a life…….we said the system needs to be joined up where silos disappear and organisations work together and pool resources.

This is where I deleted the content of the real time content and am now typing on the way home…..

We’d been sent 2 sides of A4 pieces of paper worth of questions. What should have happened was that the people with dementia should have been given the opportunity to meet for half a day in order to recover from long journeys and to feel relaxed before meeting with Amelia.

We’d been given questions and as people with dementia, we needed structure. We’d each answered our own questions diligently but then it became a ‘relaxed’ conversation flitting here there and everywhere. By the time Tommy and Paul arrived, having been delayed by the snow, they quite naturally needed to start at the first question, which we’d already covered.

There were so many brilliant ideas from all of us. One of the best coming from recently diagnosed Pam, who suggested having dementia clinics in GP surgeries, just as we have diabetic clinics.

90 mins was less time than a one way journey for each of us………no refreshments, not even a biscuit and as for the tea situation, well that was unforgivable………….

The system is set up to let people ‘exist’ not live a life…….we said the system needs to be joined up where silos disappear and organisations work together and pool resources.

Having experienced this meeting it was poignant to hear Tommy say that there was much discussion in his group in Liverpool around future care and people weren’t enamoured with the propect of what was waiting for them.The ‘one way ticket to Dignitas’ was still a hot topic of discussion as being the only dignified option and sadly I’m in agreement……

My problem with the whole of this is that the general public affected by dementia, don’t know what they don’t know and often are in need of services at crisis point.
50% is healthcare professions lack of knowledge, 50% is also the publics lack of knowledge…
We need to make it normal to talk about dementia……It shouldn’t be a few of us speaking out publicly all the time – it’s bloomin exhausting! We shouldn’t have to ask what’s available, we should be told and supported to find what we need.
I always think ‘maybe this time will be different at the Kremlin……’………I arrived hopeful, once again, I left despondent ……….and they forgot to bring claim forms for expenses………so we’ll have to wait an age for that now…….once again, not good enough…..

The only glimmer of good was seeing Hannah’s enthusiasm, new to the Alzheimers society. She desparetly tried to make the most of a badly organised meeting.

The journey home……mmmm interesting …It started off wonderfully as I shared my taxi with Tommy and Paul back to the station. Much hilarity, much putting the world to rights and a shame we were only together for a short time……..as for the rest of my journey…..it was the same as the morning but in reverse. I missed my connection in Hull homeward this time….It meant I had time to go to the shop for some choccie biscuits for the taxi people as, once again, someone waited around to take me home before they finished their shift……..😍

One event cancelled tomorrow so 2 days at home and so needed…….