There was a problem with today’s blog so I’m re-sending it…Apologies if you’ve already read it.

Yesterday saw me at a slightly different type of conference to what I’m use to, in so far as I was invited to speak at the annual Market Research Institute, IMPACT 2017 conference in London.

I’d been contacted by Lisa Edgar, Director of the Big Window Consulting Limited some months ago. She was doing some research into how financial companies could help people with dementia use their services. She then asked if I would do a double act with her at the conference.

The main speakers include Caitlin Moran – feminist and author, Nicola Mendelshon – Vice President of Facebook, Oliver James – Psychologist and finally Ed Balls, who would probably prefer to be referred to as former Chancellor, but was also listed as ‘that ‘Gangnam Salsa’
from Strictly come Dancing 😂😂
And the A-Z of delegates, was even more diverse from BBC, to Twitter and Walt Disney to Tesco along with many Research companies!

So as you can see it was a very eclectic mix of companies and speakers – oh and me and Lisa…..😊

The journey began brilliantly as Lisa had very kindly booked me a 1st Class ticket so I had a cuppa in situe even before the Humber bridge…..

which looked lovely in the morning sunshine

– never travelled in First Class ever, ever – so comfy and stress free, especially when someone keeps refilling my cuppa…….☕ and with Yorkshire Tea!

So all in all I was a happy chappie and could quite get used to this comfy travel…..😎

I wasn’t going for the whole conference as I’m travelling to Exeter today, so I wouldn’t get to hear all that was going on. Amazingly the venue was a hotel I know well near Tower Hill.
Me and Lisa were part of a session called:
“Transforming lives: research for meaningful change – Part 1.”

There were 3 different talks, ours being the last. We were part of a lunchtime session so I was worried people would be too interested in the lunch……I needn’t have worried. Five minutes to go and the room was sparsely populated……..but the next time I looked round, it was full with people standing along the side and at the back👍

First of the 3 was from Network Rail talking about the yearly 262 suicides – and they talked about how they can improve this situation, from the individuals perspective but also from a business perspective. A driver affected by a suicide takes on average of 29 days off following an on track suicide and 10 other staff respond and also suffer trauma. They’re researching an app designed to prevent these incidents by allowing people to report anyone they thought was at risk. The app tapped into the desire of commuters to help one another and broke down barriers. – “Empowering commuters to help each other”
It ran for just 8 weeks and in that 8 weeks 7 people benefited from its use amazing. A second pilot of the scheme is under consideration at the mo.

The second one was around genocide in Rwanda.
The charity supports survivors of the genocide. Many people would have seen them through Red Nose Day. They help people rebuild their lives and give them the opportunity to improve their lives. They been supporting widows to set themselves up creating jewellery in order to provide an income for themselves. They showed the 2 campaign routes to different audiences – images of people, images of the jewellery – they found people would click on images of the jewellery rather than the people. This said a lot about the saturation of donation requests from charities – sooo interesting.

Me and Lisa were last to go – we did it in the style of a chat between the 2 of us so were able to sit in comfy chairs. We’d practiced via Facetime to get the timing right.
We were introduced by Lesley Sopp, Chief of Market Research at the Financial Conduct Authority. 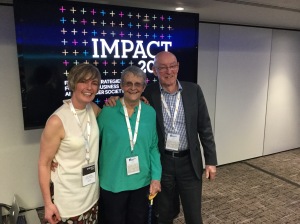 He asked a single question of the audience……”How many of you know someone, or care for someone with dementia”? Now remember that this audience was made up of financial and big business companies, so not my usual audience…………
A staggering ¾ of the audience raised their hand……😳
Amongst many things, Lisa asked me what had changed since dementia and I spoke of the difficulty I had using the phone and why. She also asked me what one thing would I like the audience to appreciate and my response was:
“the importance of patience and a smiley friendly face.”
And I ended by saying:
“If you Get it right for people with dementia you get it right for many other groups of people. And a dementia friendly attitude then becomes a service that is ‘people friendly’ benefiting so many more’
It seemed to go down amazingly well and so many people came up afterwards to say thankyou.
All I want to say is a BIG thank you to Lisa for asking me and giving me such a different WOW! moment. Feeling very lucky……😊

More about Lisa’s company can be found here:

3 thoughts on “Another WOW! day at a different type of Conference…”