So Monday’s blog spoke of me welcoming Tomo from Japan, into my home, well yesterday Tomo and the Japanese film crew visited Minds and Voices, the support group I attend in York. Tomo was travelling back to Japan on Tuesday so this would probably be his last event before travelling home……

It was an early start as I have to leave my house by taxi at 07,15 in order to get to the bus station in time as the village buses are non existent until later in the morning……. 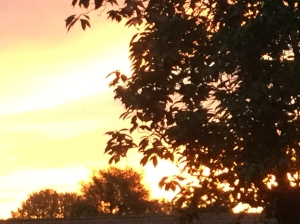 Damian had kindly agreed to pick me up from York and take me to the hall so I made myself comfy in the station until it was time.

This was our first meeting since our summer break so it had seemed ages since I’d seen everyone.

We arrived in time to find Emily had boiled the hot water so a cuppa was the first thing to be had…….Taxis soon started to arrive and people made themselves comfy before Tomo and all his friends arrived…..this time were 10 extras including the lovely Philly Hare! 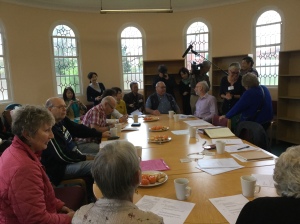 After everyone had settled down with a cuppa, we got started.

We went round and introduced ourselves to our guests…..

Emily told our visitors about our group – we’re quite unusual as we’re an independent group not created out of health services. But that gives us the ability to be vocal in whatever area we feel necessary.

Eddy told Tomo to live life for today and don’t worry about tomorrow.

We had an update from Emily and Damian including a project with the North Yorkshire Police. And then ensued a conversation about our experience when we were diagnosed and how unsupportive our employers were. 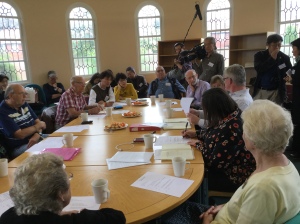 Tomo told us about his experience of keeping his job post diagnosis at Toyota. He was supported to stay in work and now has a different job which still uses his creativity.Through his interpreter he said:

”It may take me more time to do my job but with support I can still work.”

At first people didn’t know how or what to say to him, but he made a point of talking to any colleagues who would listen and gradually they began to accept and ask questions about dementia.

We all agree that this attitude should be the norm…..

Tomo told us about his experience of dementia in Japan. How it’s unusual at present for people to speak out

We spoke of the strategies we have to cope with daily living and make it easier….

We talked, discussed and laughed all morning before it was time for Tomo to leave. I didn’t type much as it was difficult concentrating and it wasn’t a particularly good day a head point of view after yesterday’s wonderful, yet tiring visit. The one main message that came out of the morning was:

“Live as well as you possibly can with dementia” – after all, you don’t get a second chance……

4 thoughts on “Minds and Voices with a Japanese twist……”