Yesterday – Day 3 of Dementia Awareness week – found me in Doncaster for the above event. Michele Clarke, Strategy and Delivery Manager for NHS Doncaster Clinical Commissioning Group had contacted me a while ago to see if I would talk about my experience of young onset diagnosis and my involvement in research and technology. Also speaking was the lovely Professor Claire Surr from Leeds Beckett University. So the theme of the day was research and how they can get more into the community.

It was another lovely sunny day and the smiley faces on the pansies outside the railway station were enough to lift anyone’s spirits. The fogginess, which had lived in my brain for the last 2 days was beginning to lift and was now simply a nuisance mist so the day was looking good.

Michele had arranged for a colleague, Lucie to pick me up from the Doncaster station and had even sent me a photo, so brownie points immediately given………..Lucie had been busy putting together everything for Dementia Awareness week.

I was met by Michele at Doncaster college and shown around. 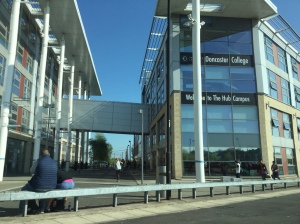 While we were waiting for the tea and coffee to arrive I sat in a ‘reminiscence quiet corner’ that Doncaster Museum loans service was setting up. They have 20 memory boxes at the museum which they can loan out to the public and organisations. 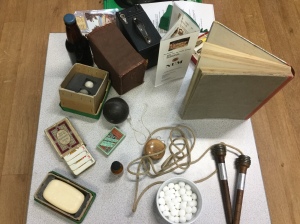 Soon after I spotted the wonderful Trevor Jarvis and his wife Anne and also Wendy Sharp who also lives with dementia and does amazing work in her area. Rod Kersh from Twitterland came over and said hello – always nice to meet my ‘virtual’ friends in person…..
Wayne Goddard – Integrated Lead for Dementia – started off the event

Professor Claire Surr was the first speaker and spoke about her research at Leeds Beckett and the development of research through the decades.
The theme of this day is research as the area wants to encourage more research participation. Claire set the scene perfectly.

Next up was ‘Unlocking Dementia’ – A short play performed by Doncaster Community Arts. It’s aim is to change the way people understand dementia and the performance shows a different medium.

They’ve created 8 different scenes which they perform around the town. Yesterday they performed 3 in the morning . Technology – they showed the ridiculous situations we find ourselves in when we ring a large company – very funny………..
It was interactive – so they asked the audience to contribute at the end of each scene.Customer service in a supermarket – experience at a check out where someone is struggling with their money.
and finally Set in local community store – where they experienced being overwhelmed and being given too much information.

Next was me and I was given 30 minutes to talk about my experiences and passion for research involvement. It seemed to go down well, especially the tips for around the house….

And finally before lunch Roy Barnes presented the Doncaster Dementia Awards – an individual award and an organisational award for good work in the town.

The local mayor and chair of the health and well being board presented the awards. There were some ‘Highly commended’ winners and  actual winner of the individual and organisational award – proud recipients below. 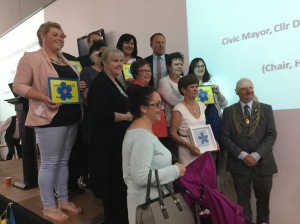 I had to leave at lunchtime as I’d promised I’d try and be back in time for the continuing ‘Tweetfest’ in the afternoon that was going on around Twitter during Dementia awareness week. This afternoon was specifically around dementia with Nichola Verstraelen – award winning clinical research team from Lancashire – So I’d worked out that if I got back into Beverley I could pop along to the library to use their wifi as I wouldn’t be able to get home in time……….